The shocking Channel 4 footage and the Parliamentary Inquiry into immigration detention have shone a light into the dark and hidden world of the UK's detention centres. Since 20th March we have been having a rally each week to protest against the UK's detention system and to show solidarity with the hunger strikers. It would be great to make them bigger and stronger in these next few weeks.

The rally is every week, on Fridays in Bristol at the junction of Stapleton Road and Easton Way from 5-7pm. Hope to see you there!


No comments:
Email ThisBlogThis!Share to TwitterShare to FacebookShare to Pinterest

'Songs from the Journey' Fundraising Concert

A magical night of food and music, celebrating life together and raising funds for the wonderful Bristol Dignity For Asylum Seekers group.

Suggested donation £5, (but no one turned away for lack of funds) 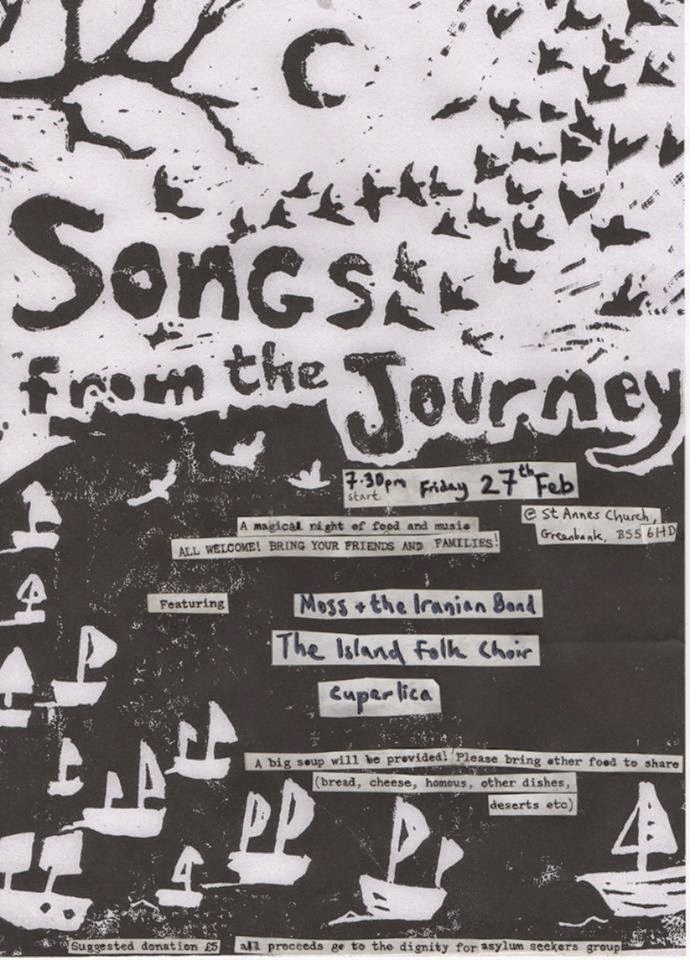 Featuring ....
Moss and the Iranian band - gentle songs and rhythms, winging their way from Iran to Englistan.

The Island Folk choir https://www.facebook.com/groups/theislandfolkchoir/ - a shake down of both traditional and contemporary songs, giving them bold and ingenious harmonies, arranged by the super-talented Polly Wilde. Mainly British folk, with some songs and inspirations from further afield. It will definitely beautiful!

Cuperlica -
A duo playing sounds and rhythms from across the Balkans, all the way to the Middle East. With soaring clarinet melodies and fast syncopated guitar and percussion, they play a stormy mixture of traditional and original songswhichwill take you on a journey to far away lands...... you may even feel the urge to dance.... if you can keep time!!


A BIG VEGETARIAN SOUP WILL BE PROVIDED, PLEASE BRING OTHER FOOD TO SHARE (bread, homous, cheese, deserts, other dishes....) so we can feast joyfully together!

And bring your dancing shoes!!!


No comments:
Email ThisBlogThis!Share to TwitterShare to FacebookShare to Pinterest

On Tuesday of this week, the Home Office met with representatives of Bristol Refugee Rights, Bristol Signing Support, Borderlands, local MPs' offices and the police commissioners' team. They were presented with our 1000 strong campaign petition to reduce signing frequency for migrants and bring signing back into town where people can access it more easily.

Despite this demonstration of overwhelming support the Home Office refused to end signing at Patchway. This shows an ongoing lack of respect for the people who have to travel so far to sign and a disregard for the community and civil servants who have shown a lot of concern for signers. We are outraged by this lack of accountability to the public from a government office. Sadly this reflects what we have seen in the past with regard to their decision making process on people's asylum applications.

However, the Home Office was forced to concede two things as a result of all the pressure: signing for families will be reduced to every six months, and people in education will be able to request to sign out of term time only. The Home Office has agreed to review the move to Patchway again after another three months.

People are still having to sign weekly, fortnightly or monthly at great cost to their emotional health and with no reasonable justification as to why they should have to sign so often. People are still at risk of being detained despite having committed no crime.

This is why we must continue to be organised. These two concessions happened because we were organised. We came together, people signing and their allies. We believed it was worth naming this injustice and demanding change. We organised events, petitions, speakers, trained ourselves to speak to the media and got good coverage; we tweeted and blogged on social media, getting support from across the country, and momentum grew. The Home Office was forced to defend its decision publicly and had to make some concessions. Many more people know about the signing regime as a result of this campaign. We celebrate this.

Imagine what more could happen if we were louder and stronger....

We will be reconvening soon to work out our next movements in this campaign and how we can continue to fight for justice for all migrants. If you would like to get more involved in the next stage of our campaigning please email us on asylumisnotacrime@mail.com
From all at Dignity Group
No comments:
Email ThisBlogThis!Share to TwitterShare to FacebookShare to Pinterest
Labels: Patchway

Tonight, Bristol City Council voted YES to support the first aim of our campaign - to end Signing at Patchway. They will join us in putting pressure on the Home Office. 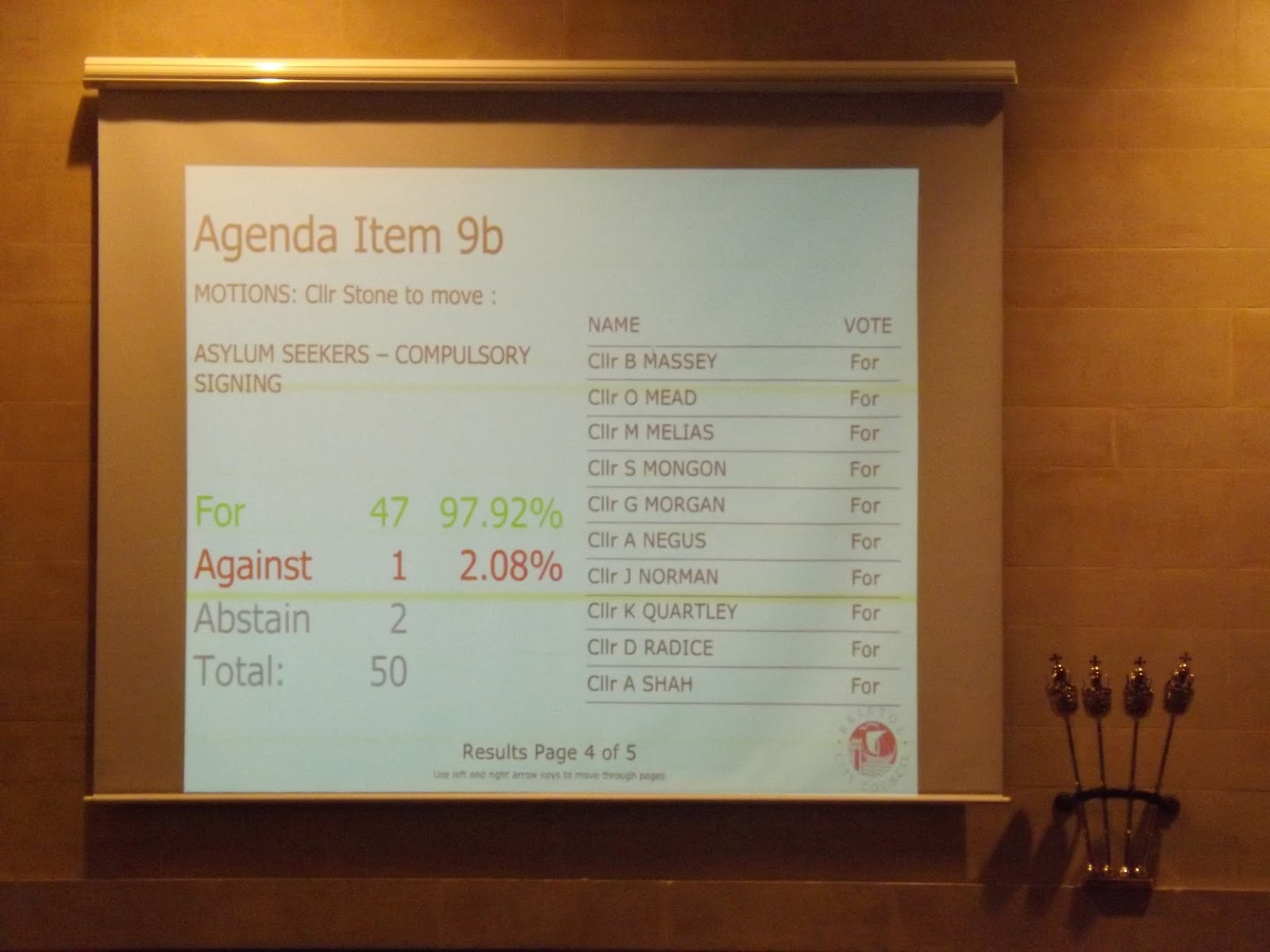 Listen to Janet and Claire speak about the challenges for migrants to sign at Patchway.


Congratulations @DignityBristol re @BristolCouncil motion of support 4 #longwalktopatchway campaign! And thanks for bringing to my attention
— George Ferguson (@GeorgeFergusonx) December 16, 2014

Here is what the Councillors said in the debate.

Cllr Ron Stone (who presented the motion)
"It is hard enough for most of us to drive to patchway. even more difficult to work out a route that makes sense on public transport. Imagine yourself someone in this country, fear of life back home, maybe limited english, restricted financial support and legally required to sign at a police station in this city and your only option is to walk.

We claim to be a city of sanctuary. We have plaques that we have congratulated ourselves, of being supportive, of being humanitarian and understanding, yet this is a nonsense. What we should do to deserve this plaque, all of us in the council chamber tonight is to recognise the difficulty of that lady who spoke earlier, to give her 100% support. We need to lobby the Home Office and get better, more flexible, signing for people who are here trying to get legal application to become british citizens. I ask you seriously tonight to support this motion, across the political divide 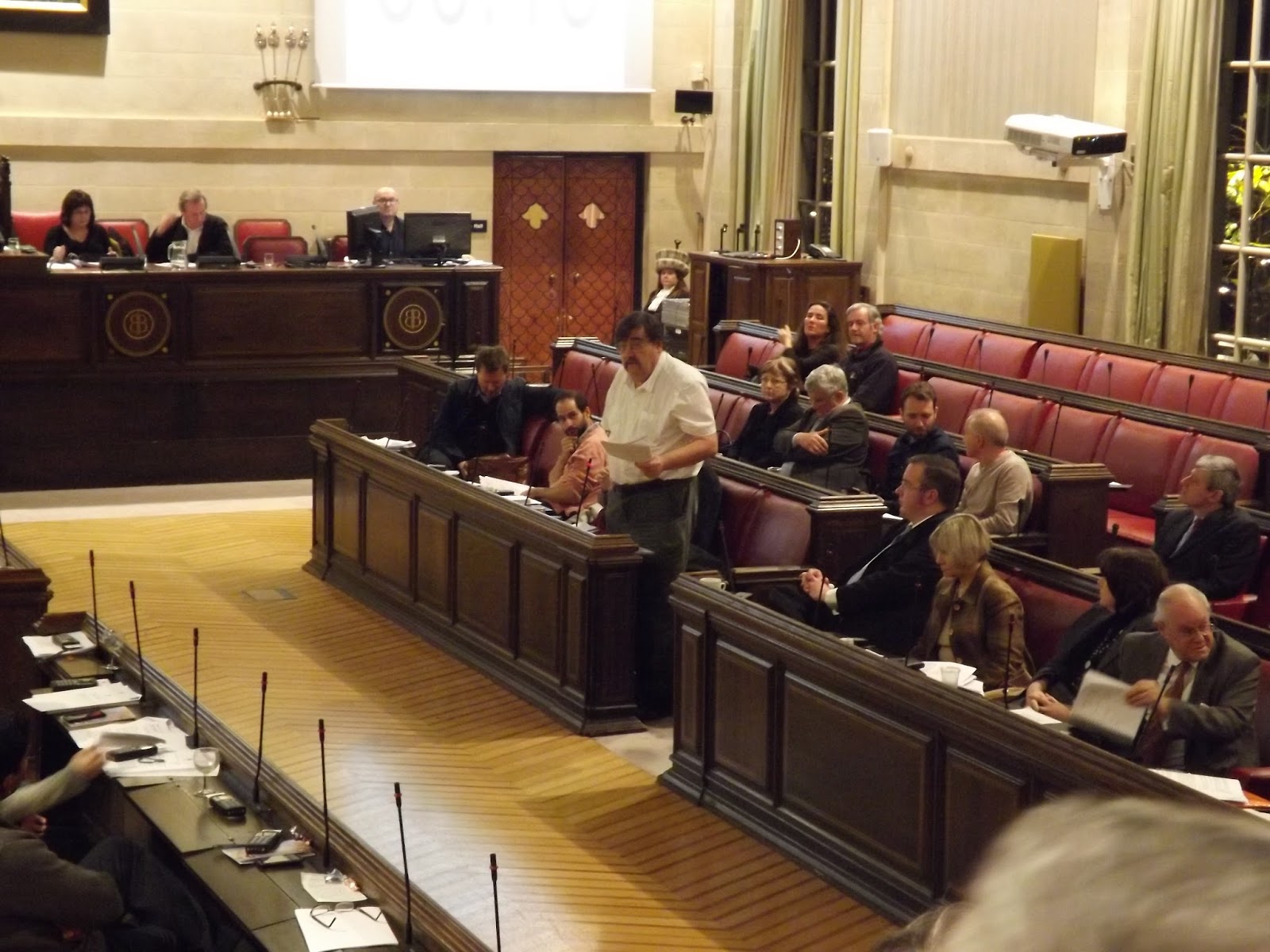 Cllr Hopkins
"Last week i took opportunity to meet with the Police and Crime Commissioner to raise this matter, and we have their full support. There will be a police presence within the Lawrence hill area, it will be sufficient to allow the service to be provided from that area. We are pushing at an open door. It is also right that we get the Mayor to put energy into this matter and solve this very important problem.

Cllr Bolton
"There are times when it is difficult to understand how such crass decision are made. One can only hope the decision was an act of stupidity. If it is deliberate then it is quite a deliberate act of malice against some of the most vulnerable people in our city. Either way, it has no place in a caring city and the decision should be reversed.


Cllr Melais
"Cllr Ron clearly feels very passionate. Our group fully supports this. UK has long and honourable respectable reputation for assisting those who seek refuge on our shores. I have no intention of widening this debate in to the rights and wrong of national policy on the subject. All too often these arguments get reduced to different views over how asylum applications are handled and resolved.  As far as this resolution is concerned, as Ron explained, since 1st October of this year there is a requirement for many migrants to travel out to report at Patchway police station. I'm sure most members here will agree given our less than perfect transport system this is an unreasonable task and less than sensible arrangement. Bristol Refugee Rights website also advise us that the policy is to be reviewed in 2015. No doubt our Police and Crime Commissioner will be as interested as us in finding an alternative sensible location where the signing can take place. Of course no harm calling our Mayor to work with Sue Mountstevens and do what he can. We support the motion.

Mayor Ferguson
"I thank the petitioners and Ron for bringing this to our attention. I will absolutely work with Police and Crime Commissioner to lobby the Home Office to see if we can get a much more satisfactory arrangement.

Cllr Khan
"I know we have lots of issue around this asylum seeker. I have to mention the abuse that has been done to asylum seekers, such as introducing a van going round,and when they go to sign and they are detained for no reason, and now they have to travel to Patchway to sign. Underlining all of the good things that people do in this country, they are always on the spotlight for no reason. Again they are on the spotlight, lack of funds and physical illness are causing too much stress. I as well also ask the Mayor and Police Commissioner to do everything possible to bring a signing in the city so that these people can be left alone and abide the law and do their everyday business."

Cllr Jama
"As someone who was a former refugee and asylum seekers, and a big supporter of Bristol City of Sanctuary status, it makes me angry and galls me, that our city leaders, whether in the police or in the council, that in terms of this City of Sanctuary status, it is about celebrating this status. It is about being proactive, embedding in the actions we take, making sure that these poor vulnerable people who live in everyone of our wards, are safeguarded and not further hurt by some indirect action the border agency has taken.
I raised this issue with the Police Crime Commissioner over 3 months ago and with Senior Offices within the Council and I am really embarrassed and angry that it has come to to. We knew this was going to happen. We knew the signing was going to change from Trinity Road police station and it was going to now happen at Patchway. The asylum seeker and refugee community, with Labour party raised this issue. Why has the council and the police, with all its mights and personnel and resources not managed to be proactive about this and stop the signing changing from one location to another?

We have heard that this feels like a punishment to this community, some of these people have been persecuted in their country. They are hear looking for a safe haven. I am really disappointed in the council and in the police and I hope George Ferguson the Mayor and the Council will work with us to ensure this catastrophe is bought a very quick end and also that the learning from this, that  when decisions are made that we are know are going to impact negatively on a poor community, that we stop them before it actually happens."

Cllr Hance,
"All kinds of ghastly indignities inflicted to asylum seekers across the country. I am quite proud that in this city we have caught the, we have cross party agreement, we noticed and we are going to try and do something about it. That is quite unusual."

Everyone except the UKIP councillor voted in favour. He did not speak against it.
No comments:
Email ThisBlogThis!Share to TwitterShare to FacebookShare to Pinterest
Labels: Bristol council, Patchway
Older Posts Home
Subscribe to: Posts (Atom)