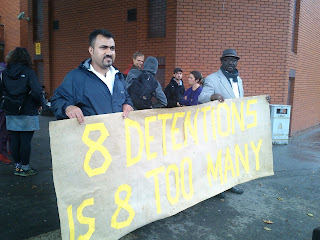 "I came here today to show solidarity with people in the aslyum system. I think we need to highlight how sudden (quick) detention can happen. It is important to say that no one should be illegal. Money and goods can flow freely around the world but for some reason humans can't.

The asylum system adds to a racist society because it creates a divide between people from different places. And lots of migration is caused by British foreign policy.

I think it is important to destroy the isolation and for people who are in there to know they are not alone. We need to shown community and break down barriers. That is why I am here, as someone from Bristol."

Eight detentions is eight too many

Parwaneh gave this powerful speech in Queen Square at the end of the demonstration.
"As a person who has lived away from her country for 29 years, I have witnessed the life of many asylum seekers and refugees during this time.

Today I would like to focus on the system of asylum seeker in the UK, which takes away the human rights of refused asylum seekers and makes them destitute. In my opinion, this system is not only harmful for asylum seekers, but also has a very negative impact on the society overall. Isolation, depression, hunger, disappointment and fear of these people will have its consequences and they will never feel themselves as a member of the society after such a long time discrimination.

The system does not permit refused asylum seekers to reside in the UK and portrait them to be illegal, but in reality they are living here, although the systems ignore this truth. Further the system does not give them work permission and when the poverty and hunger of these people and their families forced them to work, usually in hardest and most injustice condition, they are arrested and kept in detention or they are threatened with deportation.

If they cannot work legally and are forced to earn below the minimum wage to stay alive, is this not a form of slavery?

I would like to ask according to the Universal Declaration of Human Rights, what is the identity of refused asylum seeker before law? Why they should be punished so hardly for fleeing from a dangerous country? We should not forget, that when powerful countries attack places such as Afghanistan and Iraq, apart from destroying countries and the death of innocent people, they should not be surprised, when endangered people seek asylum. The international intervention must stop. Supporting the dictatorship in the world must stop.

And please don’t forget, the war and politic are not the only reason for asylum seekers to flee from their countries. Severe poverty is clearly violation against human rights. When unjust global investment occurs in countries where people are barbarically exploited and enslaved, how can you justly expect people to remain under the merciless condition without trying to move to other places in the hope of perhaps having a better life.

Different forms of contemporary slavery, show exploitation of people particularly women and children is growing in entire world, for example %80 of coca produced by using slave labour in Ivory Coast.

The company Nestle also enslaves labours in the most brutal form. Trafficking as a new form of slavery is now a very profitable trade. The profit of weapons productions are unimaginably high, whereas several children die from hunger every day in Africa.

In such a world full of injustice the border of wealthy countries “ of course with human rights constitutions!” are closed to impoverished people. The distance between wealth and poverty is increasing every day and this is a real danger for the entire world’s future generation .The form of unjust global investment and new form of slavery must stop immediately.

It seems that the contemporary borders are rather the border between poor and rich countries. Millions of people are prisoners of their own borders and has not accessibility to human rights. And when these people manage to escape from their inhuman situation, sometimes the process of recognizing an asylum seeker can take several years. Home Office , consider only a few Article for asylum seekers, but how about Article 6 and 7 that state everyone has the right to recognition everywhere as a person before law, how about Article 25, which state everyone has the right to standard of living adequate for the health and well-being of her/himself and her or his family, including food, clothing, housing and medical care and necessary social services and the security.

And finally how about Article 13 which state: Everyone has the right to freedom of movement and residence within the borders of each state. This lack of freedom of movement as an essential right may be one of the reasons why vast international inequality of wealth persist and are growing. Who determine where others reside? Seeking asylum is a right and we have responsibility to respect it. No one is in this world illegal. Stop detention of asylum seeker, stop deportation of asylum seeker, stop violation of human rights.

Now to asylum seeker: do not be ashamed of your situation. Those who have caused this situation must be ashamed. According to Universal Declaration of Human Rights, you are entitled to equal respect and justice. You are citizen of this world. You need to know you are not alone. There are many kind people, have helped you, such people, who have made this events."
No comments:
Email ThisBlogThis!Share to TwitterShare to FacebookShare to Pinterest 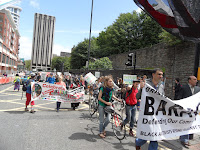 On Saturday 30th June we went on a March for Dignity for Asylum Seekers and there was more people than we expected. We marched through the city centre telling people, enlightening them about asylum seekers and what we are going through. Everybody marched with peace and happiness. We stopped at the Trinity Police Station and spoke about the different things we are suffering from.

A lot of people are losing some of their housing benefits from the cuts. I feel sorry for them because I know how it is to be destitute. I think it will be good to work together. A lot of people are blaming immigrants that they think are taking their houses when they are not.

Cindy from Zimbabwe
No comments:
Email ThisBlogThis!Share to TwitterShare to FacebookShare to Pinterest
Labels: Quotes


Excellent!I'm proud today ,and happy of being with you . We're optimistic to the future and also  invite the other asylum seekers and people to join us by the next steps and support , we all know the government treating badly to the asylum seekers SO this is just beginning of our way we have to challenge and be patient
manesh
No comments:
Email ThisBlogThis!Share to TwitterShare to FacebookShare to Pinterest

Article on Bristol 24/7 about the march last Saturday.


Asylum seekers in Bristol have marched through the city for the first time to raise awareness of the struggles they face to be accepted.
An estimated 250 people marched from Easton to Queen Square on Saturday to “speak out about the myths, truths and suffering of people seeking asylum in the UK”.

No comments:
Email ThisBlogThis!Share to TwitterShare to FacebookShare to Pinterest

We are reduced to nothing....

"Asylum seekers' have been reduced to nothing. No house, no support, no legal aid, no proper health support. We have been treated as criminals. We are monitored regulary, we have to go to police station to sign monthly or weekly. This makes us feel bad, because you don't know when you will be arrested and detained."

No comments:
Email ThisBlogThis!Share to TwitterShare to FacebookShare to Pinterest
Labels: destitution, Quotes

The government make awful situation for asylum seekers, they cut legal services... you know it's a  ridiculous system. How can asylum seekers defend their human rights when we are restricted of solicitors, legal aid etc? We asylum seekers live with just a few coins or sometime nothing at every week, no accommodation and not able to speak English because they are not allow to learn English, spending time on a street, sleeping in a park, living in limbo for years..............


So those problem make us depressed, ill, sad, far from the society.....
Imagine yourself at this situation ,What will happen?
The motto is Where All are Equal, no Human is Illegal.
manesh
No comments:
Email ThisBlogThis!Share to TwitterShare to FacebookShare to Pinterest

Explain to people our situation

“It was great for me because I think for first time the people of Bristol know the problems asylum seekers face.

We need solutions for our problems, that is why we came on the streets. I think we did good job, passing our message to people. We want people to be the bridge between us and the home office, telling them to stop being tough on asylum seekers and not to turn down our cases.

Asylum seekers can't feel safe when we have to sign at the police station every week, we feel stressed because of risk of deportation and it is not safe to send us back. We came because we are looking for place of safety and peace.”

No comments:
Email ThisBlogThis!Share to TwitterShare to FacebookShare to Pinterest
Labels: demonstration, Quotes

We sent a message yesterday

“We passed message to people and to the Home Office that asylum seekers are human too and want dignity.

I feel more freedom and more happiness after today's march. We walked together. We want to improve our situation, so that it is more equal between people. We are not less than other people.

I think we will stop them sending people back to dangerous places. We came together and we will again to fight for safety and dignity.

Also we need send the message to the government that we really have problems in our country. It's not for fun or for nothing that we are here. If our situation changes in our country we will go home.”