"I'll sew up my eyes and mouth": Ibrahim in Bristol Post

Recent coverage about the petition and Ibrahim's situation in the Bristol Post. We are presenting the petition statement to the council at 5:30pm today, please come to college green and join us. (More info)

"I'll sew up my eyes and mouth": asylum seeker | This is Bristol:


A FAILED asylum seeker has spent the past three weeks sleeping rough on College Green in protest – and threatened to sew his eyes and mouth shut to get his point across.


Ibrahim Moulkaf, 43, had to flee Algeria in 2009 after writing a book criticising the government and violent behaviour of Islamic fundamentalists and promoting peace.


The publication of Democracy in the Arab and Islamic World in France led to hard line Islamic militants starting a hate campaign against him.


They preached in Mosques about him, he received death threats, beatings in the street and his home was raided. He fled to England and applied for asylum but has continually been denied residence preventing him from gaining access to work, education or benefits.


He says he decided to apply to voluntarily return to Algeria, despite the risks, but permission was refused because a travel document could not be obtained for him. 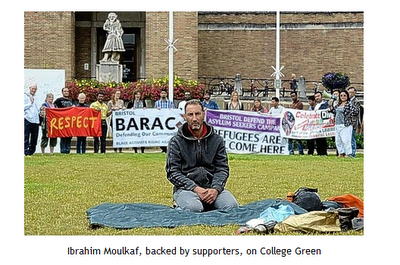 Mr Moulkaf said he had now decided to voluntarily sleep rough on College Green to protest at his position.


"I sleep on the grass unless it is raining and then I shelter either under the council building or in a shop entrance," Mr Moulkaf told the Post.


"I had been staying in a house but I have come out here in protest because my appeals for asylum have been continually denied. It is hard and I am very tired.

"It is important because this is not just about me it is about the many other, more than 100 asylum seekers, sleeping on the streets in Bristol."
Paulette North, of the Respect Party, has started a petition and is submitting a motion at Bristol City Council's cabinet meeting tomorrow entitled: "We urge Bristol City Council to follow the example of Glasgow City Council."..... Read rest of the article