On Saturday, the annual LGBT (Lesbian, Gay, Bi-Sexual, Transgender) Pride March was held in Bristol. A block of about 40 people joined the march to tell everyone how LGBT asylum seekers are treated by the UKBA and to challenge the Racist Immigration Border controls, demanding the Right to Asylum for All. 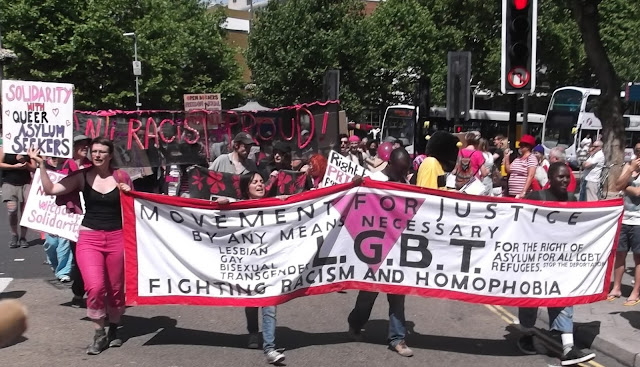 I interviewed two gay asylum seekers who were so excited to know people in Bristol were speaking up to support LGBT asylum seekers that they came from London to join us!

I came to Bristol today to be part of Pride march. Pride is part of me, being a gay man I want to support the gay community. I am proud of who I am.” said Noah, a gay Ugandan man who is a refugee seeing asylum and part of Movement for Justice.

“I am part of Movement for Justice (MFJ) We help asylum seekers. Not just LGBT asylum seekers but all who need help, who run because of persecution. Since I got involved I have made lots of friends and it has really relieved my depressions. We have meetings every Sunday.

There are many LGBT asylum seekers out there. They don't want to be public but I think people must come out. If you don't tell people you ran because of your sexuality then you won't get the help you need and the Home Office are less likely to believe you. To help LGBT asylum seekers we need to tell people we are out here, willing to help them. 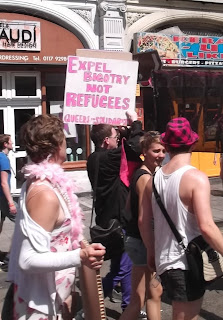 I am glad I am here in Bristol at Pride, meeting people who feel the same and who give support to asylum seekers. I am really grateful. I love the spirit of togetherness.

I am Ugandan, a proud gay Ugandan. My country is a beautiful place. There is one big problem – the torture and persecution of people who are lesbians, gay, not straight. Lesbian and gay Ugandans – we cannot survive. 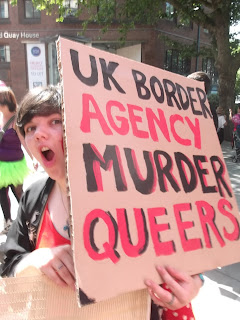 As a teenager it was tough for me. I was an intelligent kid. I knew I was gay and I knew I had a dark future ahead of me. Discreteness was the order of the day to survive. But being discrete damaged me, I lost focus, it was hard to talk to anyone. Very few people want to hear. My dad threatened me as he suspected.

I came to the UK on a visitor's visa. I was here. I came out as felt safer. I had to come out, if not I'd be caught in a cocoon – I felt like I was dying inside. Then my family found out, they disowned me and I could not go back. I knew if I went back, I would not be safe. That was eight years ago.

I stayed and I felt safe. It took me a long time to get use to life here, learning how to catch a bus, get a round. It took much longer before I knew I could claim asylum and how to do it. Now the UKBA use this against me.

Relationships didn't go well as I was dependent, not allowed to work. I am still homeless, I get by with support from friends who are not homophobic. I have experienced a lot of discrimination and homophobia. As an asylum seeker I have many problems, I think all asylum seekers have these problems.

I've been involved in MFJ for 4 months. I love its work. It supports minority groups to be recognised as humans in this country. Everyone on this land has value, the authority treats peoples is not fair at all, it treats us like animals. We need a good life.

This is more than about me trying to get status. It is much more than that. My aim is to name and shame how the asylum system operates. My message to other asylum seekers if stay strong, keep fighting and if you are lesbian or gay, come out and join this movement. Wherever I go I tell people this.